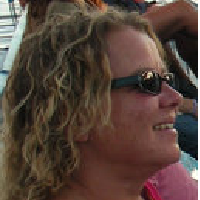 Mechanisms of tolerance and stress signaling

Gwenola Gouesbet is a Research Engineer from French National Center for Scientific Research (CNRS) in the "Ecosystems, biodiversity, evolution" lab (UMR CNRS Ecobio 6553) at the University of Rennes I (France). She focuses her research on the study of mechanisms of tolerance and stress signaling.
She joined the "Ecosystems, biodiversity, evolution" lab (UMR CNRS Ecobio 6553) at the University of Rennes I (France) in 2001 to further characterize the mechanisms of tolerance to environmental constraints in plants. Her studies on plant responses to heat and xenobiotic stress led her to characterize tolerance mechanisms on a eukaryotic model organism, Arabidopsis thaliana, and to extend her problematic to non-model photosynthetic organisms.
She is currently studying the mechanisms of adaptation to environmental constraints in biological models subject to climatic variations and anthropogenic threats. In order to get closer to realistic environmental conditions, her plant models cover also agri-environmental plant species of field margins, and used constraints include low doses of active pesticides and their degradation products, mimicking residual pollution, as well as high temperature as climate change stressor. Her current projects concern, inter alia, the plant responses to pesticides at environmentally-relevant levels and the complexity of crosstalk between many implicated signaling pathways. This work aims at identifying and characterizing, at molecular, biochemical and physiological levels, central components (receptors, regulators, transcription factors, stress-activated protein kinases) of xenobiotic sensing mechanisms, it will constitute a major breakthrough for understanding plant behavior under chemical stress. Moreover, studies using heat stress as a surrounding constraint are undertaken to decipher the effect of climate change stressor as a factor of attenuation or amplification of plant stress response. Her projects also concern the study of molecular mechanisms of resistance in insects in response to insecticides or nanoplastics in a context of global change.
The identification of crosstalk processes between xenobiotic, abiotic and biotic stress signaling will give novel insights into the interplay between chemical pollution and climate change stressors.